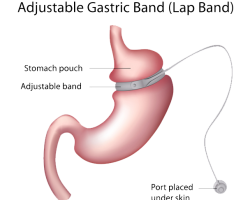 Laparoscopic gastric plication has emerged as a new bariatric procedure with promising results. This paved the path for further innovation and conception of a new procedure known as “Laparoscopic Adjustable Gastric Banded Plication”. This dual restrictive procedure involves gastric greater curvature placation or infolding of the stomach to form a gastric sleeve followed by placement of an adjustable band in the upper part of the stomach.

Unlike other bariatric surgery procedures, there is no stapling involved with LAGBP. No part of the stomach or intestines is cut or removed either. They are just folded from within followed by band placement. LAGBP can be reversed to normal anatomy or revised to any other procedure.

Is Gastric Plication good choice for me?

The best and only way to determine which, if any, bariatric surgery is right for you is to schedule a consultation. We will take a thorough obesity history and discuss all of the alternatives, including sleeve Gastrectomy and gastric bypass surgery.

What to Expect During and After LAGBP?

It takes 2-3 hours to perform. Many people will stay in the hospital for up to two days after the procedure.

Your recovery begins almost immediately after the surgery as you gradually begin to get used to your new way of eating. This starts with a two-week liquid diet that likely will include water, milk, coconut water, fruit juice and lime juice. The next few weeks will involve thicker liquids such as soup with some vegetables, and eventually you can try yogurts and fruits. After this, you will be able to eat all foods in restricted amounts.  We start Band adjustments 3 months after the surgery.

What are the benefits of LAGBP?

What Are the Risks of Laparoscopic Adjustable Gastric banded Plication?

When we discuss the risks of any bariatric surgery, they must be compared to the serious risks associated with obesity. Risks of gastric plication include bleeding, blood clots, infection, and injury to other organs.

Other LAGBP-specific risks may include:

Do I need to take bed rest after the surgery?

We encourage you to walk 2-3 hours after the surgery as being active and mobile reduces the risk of deep vein thrombosis. On third day, you are discharged from the hospital and you can return to work within a week.

Will I ever regain weight after this surgery?

What will be my diet after the surgery?

You will need to be on a liquid diet for first 15 days after the surgery. This is followed by 15 days of semi-solid foods and then you progress onto solids. Within 2 to 3 months you can have all kinds of foods though in limited quantities.