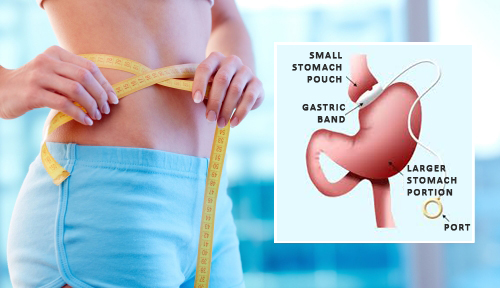 Laparoscopic gastric greater curvature plication halves the size of your stomach to limit the amount of food you can eat at any one time. This is achieved by folding the stomach wall inward and suturing it (No cutting, no stapling) in 2 layers using Dr. C.K. Huang’s Gastric plication formula.

The laparoscopic gastric greater curvature plication, a kind of gastric sleeve remains the most physiological surgical treatment option for sustainable weight loss in patients with severe obesity. It was first introduced by Mohammad Talebpour 14 years ago. This procedure was developed to mimic some of the effects of the sleeve gastrectomy (gastric restriction) without the same degree of risk of complications like leak, hemorrhage, stricture and anemia.

What is Gastric Plication?

Gastric plication involves in folding of your stomach along the greater curvature in 2 layers. Stitches are placed in the stomach to secure the folded stomach wall. This reduces the stomach volume by as much as 70 percent. As such, your stomach can no longer hold the volume of food it used to. You will feel fuller sooner, and this results in weight loss.

Most of patients lose 40 – 60 percent of their excess body weight during the first year after gastric plication surgery. As with other procedures that cause massive weight loss, there may also be improvements in many obesity-related conditions like diabetes, high blood pressure, sleep apnea and abnormal cholesterol levels.

Unlike other bariatric surgery procedures, there is no stapling involved with gastric plication. No part of the stomach or intestines is cut or removed either. They are just folded from within. Gastric plication can be reversed to normal anatomy or revised to any other procedure.

Is Gastric Plication good choice for me?

The best and only way to determine which, if any, bariatric surgery is right for you is to schedule a consultation. We will take a thorough obesity history and discuss all of the alternatives, including gastric plication and adjustable gastric banded plication or sleeve gastrectomy.

What to Expect During and After Gastric Plication?

Gastric plication takes 2 hours to perform. Many people will stay in the hospital for up to two days after the procedure.

Your recovery begins almost immediately after the surgery as you gradually begin to get used to your new way of eating. This starts with a two-week liquid diet that likely will include water, milk, coconut water, fruit juice and lime juice. The next few weeks will involve thicker liquids such as soup with some vegetables, and eventually you can try yogurts and fruits. After this, you will be able to eat all foods in restricted amounts.

What are the risks of Laparoscopic Gastric Plication?

When we discuss the risks of any bariatric surgery, they must be compared to the serious risks associated with obesity. Risks of gastric plication include bleeding, blood clots, infection, and injury to other organs.

Other gastric plication-specific risks may include:

What are the benefits of Gastric Plication?

Less chance of complications such as leakage, hemorrhage, infection or erosion

No foreign body inside the body unlike gastric banding

No/minimal requirement for supplementation of calcium and multivitamins after  adequate weight loss is achieved.

What are the disadvantages of Laparoscopic Gastric Plication?

Requires intensive behavioral and life style modification for the long term success of the procedure. Plication may get dilated over a period of time if one does not change his/her eating habits.

Will I ever regain weight after this surgery?

What will be my diet after the surgery?

You will need to be on a liquid diet for first 15 days after the surgery. This is followed by 15 days of semi-solid foods and then you progress onto solids. Within 2 to 3 months you can have all kinds of foods though in limited quantities.

Do I need to take bed rest after the surgery?

We encourage you to walk 3 – 4 hours after the surgery, as being active and mobile reduces the risk of deep vein thrombosis. On third day, you are discharged from the hospital and you can return to work within a week.